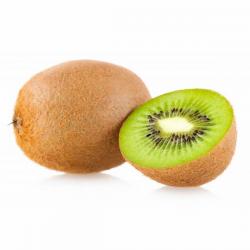 Kiwi is an edible berry . The two main varieties of this fruit are : green and gold . The first one is the most widespread and it has dark brown hairy rind, bright green pulp and small black seeds which are arranged radially around the center of the fruit . The gold variety has a more elongated shape, its pulp is yellow and it has no hairy rind. There are also other varieties but they are not widespread as for example the kiwi with the red pulp and the kiwi with brick color rind.

Today Italy is the first producer in the world , mostly in Piedmont and Latium.

Kiwis of fresh quality can be found during the following months:

Nutritional information per 100g of edible part of uncooked kiwis

The plant is native to southern China where it was grown 700 years ago for its fruit which was considered a delicacy for the Chinese emperors and its use was also ornamental .

The kiwi is a fruit with beneficial qualities , that's the reason why it is recommended to eat one a day , it is a fruit rich in vitamin C , potassium , vitamin E , copper , iron and fiber . The high content of potassium and sodium poverty make the ideal fruit for athletes because it reduces the risk of cramps

Do you want a recipe for kiwi ? Oreegano , the most advanced community focused on the food , will help ….click here !