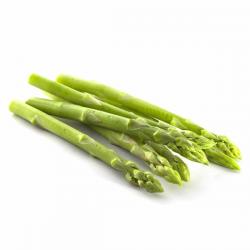 The term asparagus can designate either the entire plant or only sprouts. It is a dioecious species that is to say that grows male and female flowers on different plants: fruits (produced by the female plants) are small red berries containing black seeds. The plant is equipped with rhizomes, modified stems that grow underground forming a network; from them turion, which is the edible part of the plant, starts growing . In the case of forced cultivation turion appears white while in the open field because of photosynthesis it takes a green color. Unlike many vegetables, where the smaller and subtler sprouts are also more tender, the thicker stems of asparagus have a higher pulp than the thickness of the skin, thus being more tender. Asparagus is grown in 60 countries around the world, with a variable climate that ranges from cool temperate to tropical;  since asparagus is a crop that easily adapts to all types of weather and working.

Among the major producers of white asparagus and green asparagus producers in Europe 3 countries stand out: Germany, which holds the record for the European production of asparagus, Spain, and Italy, which is the third largest producer of asparagus in Europe.

Asparagus of fresh quality can be found during the following months:

Nutritional information per 100g of edible part of uncooked asparagus

Some of the components of the asparagus are metabolized and excreted in the urine , giving it a typical strong smell which some people consider unpleasant. It is in particular caused by some degradation products containing sulfur ( in particular thiols and thioesters ) . Some Egyptian finds show that asparagus was known in ancient Egypt and from Egypt it was spread around the Mediterranean and in Minor Asia  about 2000 years ago .

Do you want a recipe for asparagus? Oreegano , the most advanced community focused on the food , will help ….Click here !