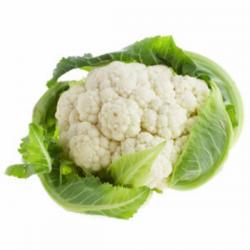 Cauliflower is a typical winter vegetable . It is characterized by a bloom, said head or ball , which can vary in color ( white , pale yellow , green , violet ) and it constitutes the edible part of the vegetable . The cauliflower has many varieties , which are distinguished by the period of maturity , so there are very early varieties ( harvested in October ) , early ( picked from November to December ) , winter ( collected in January-February ) and late (collections from March to May ) .

The world's largest producer of cauliflower is China , followed by India , Italy, Spain, France and the United States .

Cauliflower of fresh quality can be found during the following months:

Nutritional information per 100g of edible part of uncooked cauliflower

Cauliflower is native to the Middle East. From this area it was brought to Italy and already in Roman times was consumed and appreciated . In modern times a great boost to the spread came from the French court , during the time of Louis XIV .

Do you want a recipe for cauliflower? Oreegano , the most advanced community focused on the food , will help ….Click here !