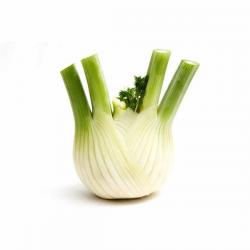 Fennel is a herbaceous plant that belongs to the family of Umbelliferae , probably native to Asia Minor but spread throughout the Mediterranean and already known by the Egyptians , the Greeks and the Arabs . It is appropriate to distinguish between cultivated and wild fennel . The two varieties are part of the same family , but while the wild grows spontaneously and is used as an aromatic plant , the one cultivated , or common , have an edible part , called " grumolo" , consisting of the basal part of the leaves and characterized by its taste sweeter and less pungent than that of wild fennel .

The crop exceeds 18,000 hectares. In Italy it's produced more in Abruzzo , Campania , Calabria , Marche , Molise , Puglia and Lazio . It is a crop characterized by a cyclical production in autumn and winter , therefore ,  it has thermal requirements fairly contained .

Fennel of fresh quality can be found during the following months:

Nutritional information per 100g of edible part of uncooked fennel

The peculiar flavor of fennel is due to the significant presence of anethole , an essence which is then employed for the preparation of liqueurs such as sambuca , pastis and anisette in France or the anis in Spain .

This vegetable has a very low calorie content , it is low in fat but rich in fiber . Fennel is very rich in minerals , especially potassium , calcium and phosphorus , which are useful for strong bones and to prevent cramping and fatigue and it contains many vitamins .

The saying " non farti infinocchiare" means do not be fooled , that recommendation was made to ​​less experienced buyers of wine, which was often added fennel seeds to mask unpleasant odors and flavors of the bad wine

Do you want a recipe for fennel ? Oreegano , the most advanced community focused on the food , will help ….click here !