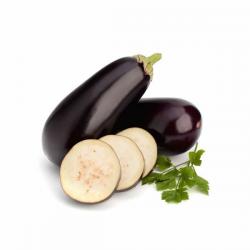 The eggplant , native to subtropical climates , requires climates not too cold . Its growth stops when the temperature drops below 12 ° C .

The eggplant ( Solanum melongena L. ) is a herbaceous plant , erect , 30 cm high just over one meter . Its flowers are large , solitary , purple or white . Its fruits area large berries , elongated or round , usually black , edible after cooking .

The eggplant is important to a significant slice of the Italian production : so much that 30 % of the crop is intended precisely to this vegetable.

Eggplant of fresh quality can be found during the following months:

Nutritional information per 100g of edible part of uncooked eggplant

The eggplant , native to India , is introduced by the Arabs in the early fourth century. Because of its name , in particular , in Italy it was popularly interpreted as unhealthy apple, because it is not edible as raw. It is said that the eggplants are potentially toxic , responsible for sudden headache and fever . This belief , at first sight paradoxical , has a grain of truth : the rae eggplant , in fact , contain considerable amounts of solanine , which is toxic . The excessive intake of solanine can cause unpleasant side effects , such as drowsiness , irritation of the gastric mucosa , etc. hemolysis . The only way to avoid this problem is cooking the eggplant : with the heat treatment , the solanine this is reduced by half .

Do you want a recipe for eggplant? Oreegano , the most advanced community focused on the food , will help ….Click here !